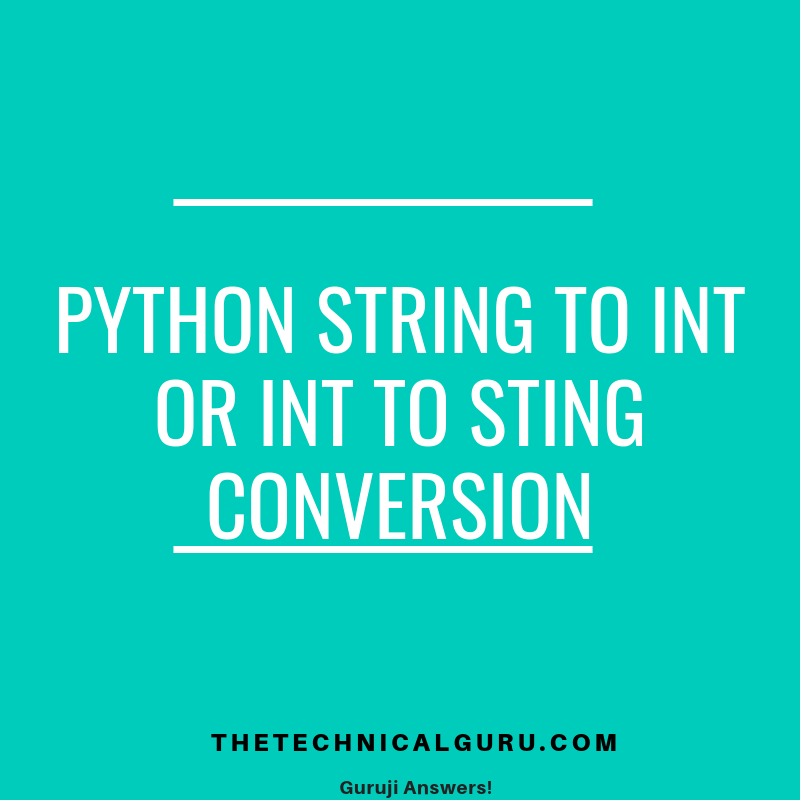 Python Int To String: If you are a software engineer or student you must be aware of programming. Programming has made this world simpler. Large and complex problems can be solvded with the programming.

Python is a popular progrmming language. There are many programming languages and each one has its own significance. But we are here to talk about Python. As a devleoper you face many chanllenges while coding. Thre are complex software programming problems to very simple like python int to string convertion.

We are going to learn about how to convert int to string in python.

Before moving forward we assume you are a person with some or little knowledge of programming in python. We won’t be explaining things like Variables and Functions etc.

But we are going to discuss what is a data type because that is relevant to this topic.

What is Int to Sting Data type in python?

To give you a perspective a data type in programming is a container of specific Type. When you want to store some data while running a program you use this Data type varaibles.

Why there is need to convert int to python?

There are different scenarios in which developer may feel need to convert the one Data type to another. if you are a developer and searching for Python Int To String conversion then you are at right place. To give you an example just assume if you want to create a string which contains Int then you may want to use Int as a string or vice versa can also happen.

How to convert the python int to string? To understand it better let’s take an example.

If you have a variable Height ,In which you are storing a int value.

Now you want to Print string containing height of person. please see the below example.

The above code shows that a height varible stores int vlaue and that int value can be converted into string using str() function which is provided by python to convert python int to string.

This process of convering the one type of varible to another is known as Type Coversion. This was all about python int to string conversion.

Now lets quickely learn about the apposite of this by converting string type to Int type.

int() function has a syntax like int(value, base). Which means you can convet any value to diffent base. Like Binay, Decimal, Ocatal etc

Now if you see the very first like of the above code block you will notice that the string variable is created and assigned value of Number to it.

On the second line we used that string variable and converted it to base 10 which is decimal.

On the next line we converted it to base 8

On the next line we converted string to int to base 7.

Now you must be very clear about how to convert int to string in python or string to int in python.

Python is very popular language and widely used by software devloper companies . We have tried to convert the topic which focuses on python int to string conversion or vice versa.

Hope you find this information useful. Let us know about the other methods by which we can convert python int to string or python string to int in comments.

Thanks for visiting us please read more about different topics on our website.